Volare is the Italian for 'to fly' (or soar) and is the name of the current European Space Agency mission being conducted by Luca Parmitano on the International Space Station. And now it's the name of my latest quilt: 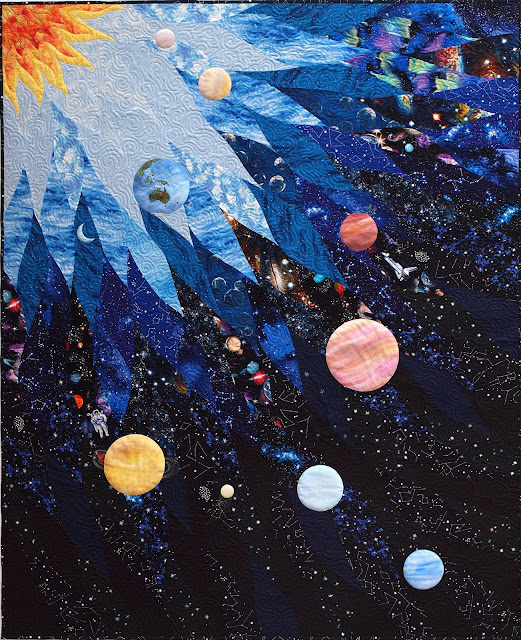 It's now in the possession of the young boy I made it for, so here are a lot of photos... 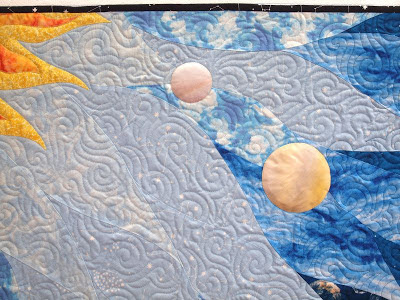 (closest to the sun, Mercury, then Venus﻿)

I explained in earlier posts about piecing the background. It came together really well, and with a bit of care at the sandwiching and quilting stages, laid beautifully flat, especially given all the free-form curves.

The planets were all made from fabrics which I painted myself after researching the colours and textures required for each. One (Mars) was an over-pained commercial print, but the others were all plain white when I started. 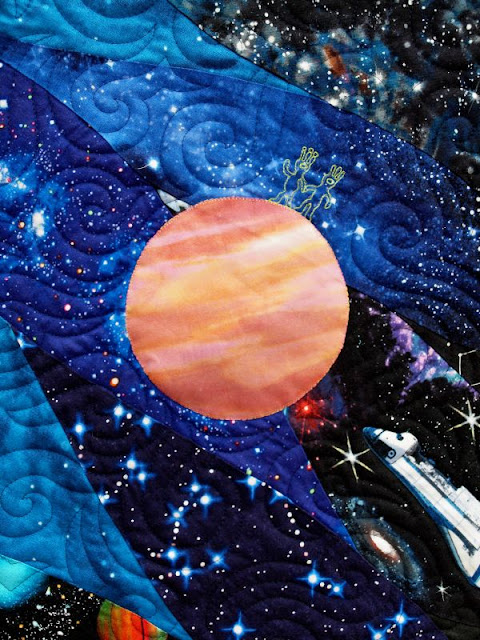 (Mars, with two Martians and an approaching Space Shuttle)﻿

Each of the planets is fused with a narrow (roughly 1/4in) ring of fusible web to a matching solid print, and then with another ring both layers were fused to the background and appliqued in place with a blanket stitch in matching thread on my machine. 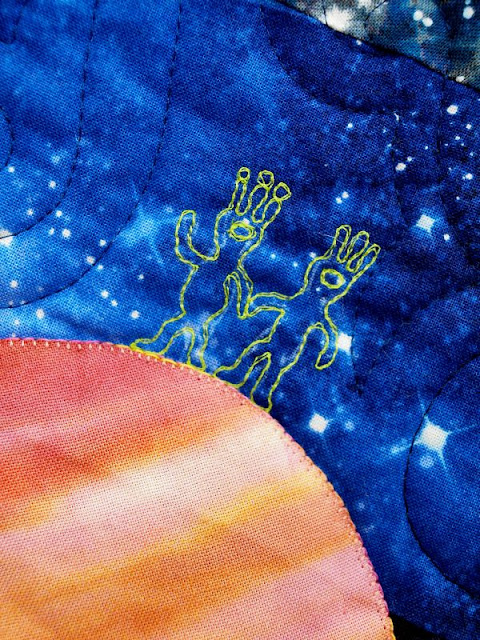 The double layer was used to enhance the colours in some cases, and avoid the background showing through. I only fused around the edges to keep them soft. Before sandwiching, I pinned cut-to-size circles of scrap batting under each planet (and the comet and moon) in a simple trapunto technique to add extra dimension and fullness. 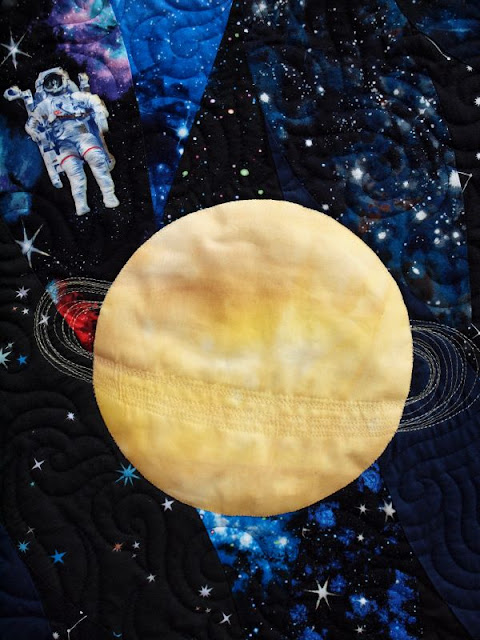 (Saturn, with rings added by machine and an astronaut on a spacewalk)

Obviously it wasn't possible to make them all to scale - or keep the distances to scale; I applied a liberal dose of artistic licence to make the layout visually pleasing. With the exception of Earth, they're sized in order, and the planets were initially placed in order of their position from the sun, but somehow Saturn shifted a bit closer than intended and here appears about as close as Jupiter. 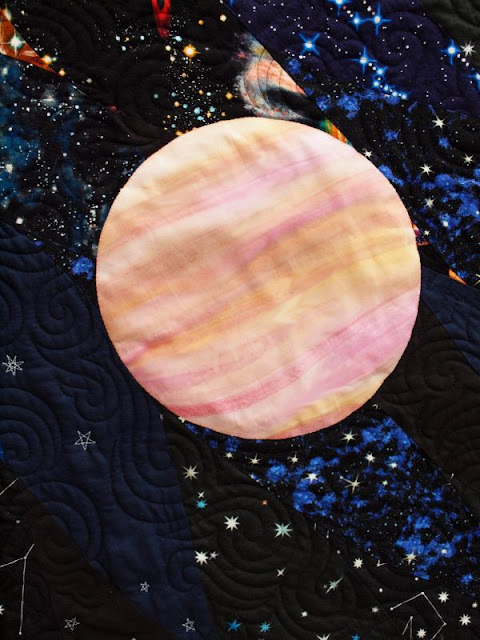 (Jupiter; my favourite of my hand-painted planet fabrics)

Most of the details were free-motion stitched prior to sandwiching (e.g. the Martians, plane, ISS and Saturn's rings) but near Jupiter is something I added during the quilting. It's visible in the image above, below and to the left of the planet, but here's more detail below: 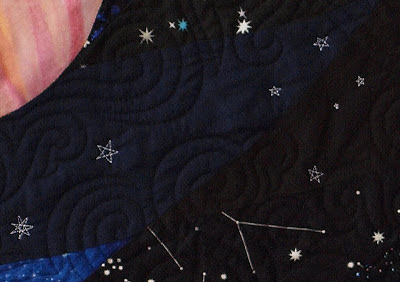 Rotated here to its more familiar orientation is the Southern Cross, a constellation always visible in the southern hemisphere, and depicted on the Australian flag (as well as others).  On the Australian flag, all but the smallest star are shown with seven points, one for each of the six states, and another for the two territories. So I chose to quilt the larger of the two pointer stars (bottom left of the photo above) with seven points (the others were really too small for such detail). 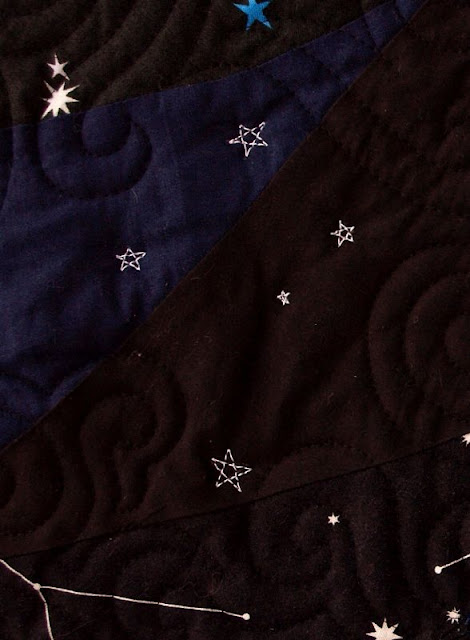 Uranus is a pale greeny-blue, but I'm still not used to how much lighter the painted fabrics are once dry, and it's a bit paler than intended: 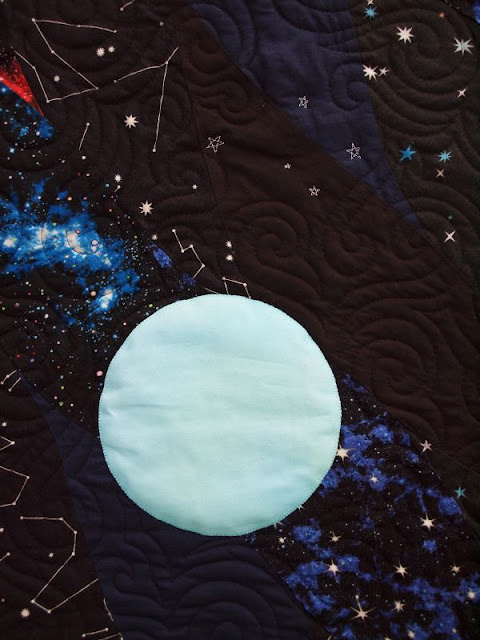 Furthest out is Neptune, among the darkest background fabrics: 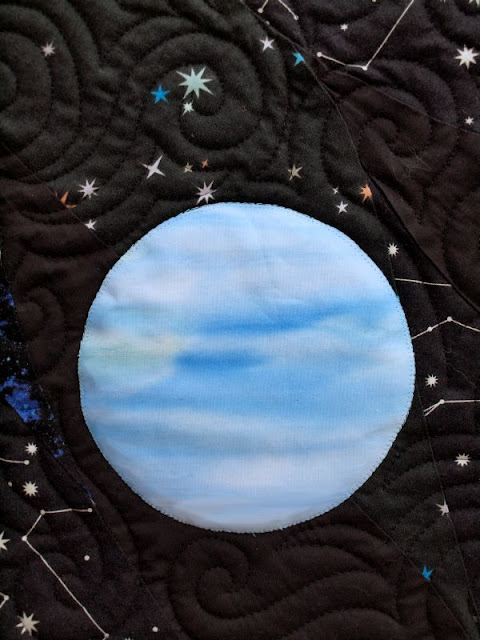 I remember the passing of Halley's Comet in 1986, so I decided to add it into the quilt as well. 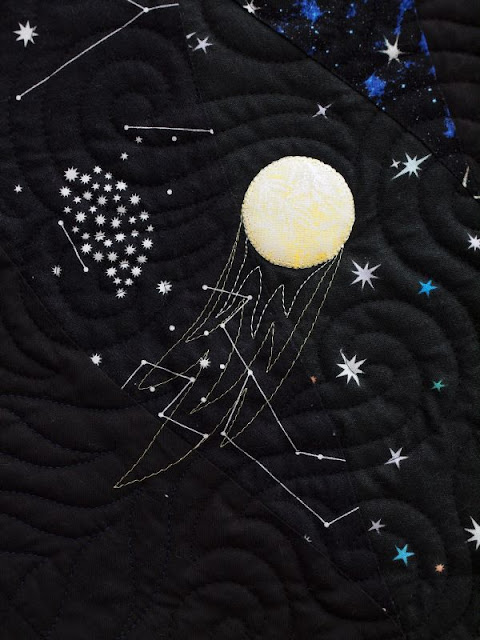 Some of the tail was added prior to sandwiching, but I added a little more yellow at the quilting stage, and if you look closely at the main image of the quilt (open it to view it larger), you'll see I quilted a subtle extended tail in navy thread round underneath and up past the left-hand side of Saturn. I used a pale yellow fairy frost fabric for the body of the comet, which gives it a but of luminescence. 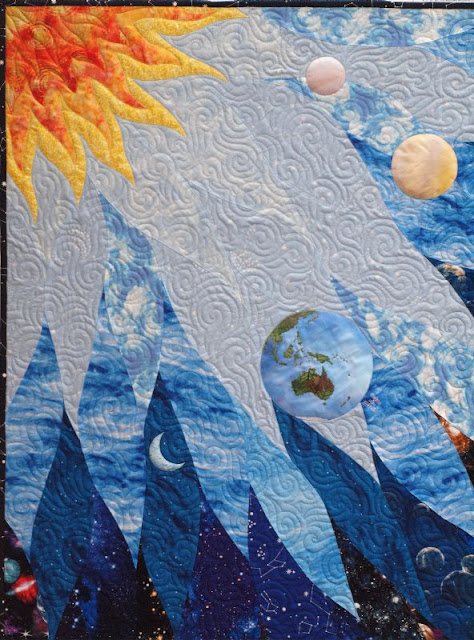 The greatest detail went into Earth. I over-emphasised its size to be able to include more detail - although it was still hard at 7in across. I used a commercial leaf-print batik for most of the land appliques on Earth - and a pearlescent snowy-white fairy frost for Antarctica. I used a combination of straight-stitch and blanket-stitch to applique the fused pieces in matching threads. 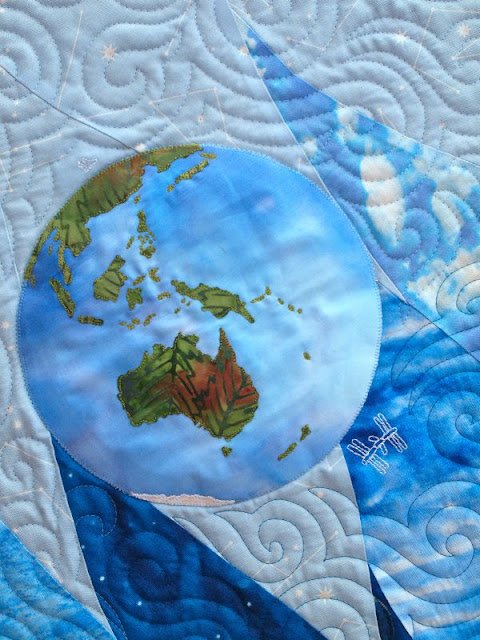 I'll tell you a little secret. Australia is sufficiently symmetrical in shape that when traced in reverse on the fusible web, I forgot it was flipped. I carefully positioned it on the fabric with a brown section to represent the drier desert areas of the central outback and northern Western Australia - and ended up with it towards the lusher rainforests of far-north Queensland instead, and didn't realise until it was permanently fused in place - oops! 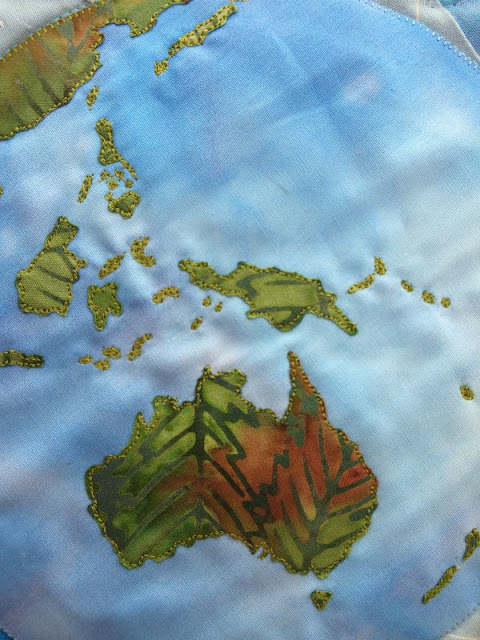 The larger land areas and islands are appliqued (I especially like the peek of Antarctica down the bottom) and I added a few more in thread-only, but naturally had to simplify considerably. I took special care to make sure the Philippine archipelago was recognisable. 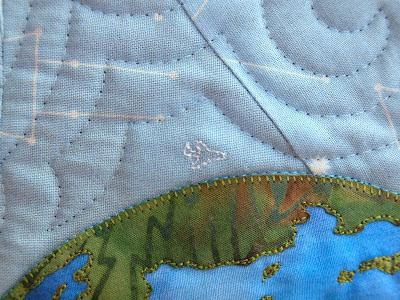 This tiny little plane over China was also thread-sketched (by machine of course). 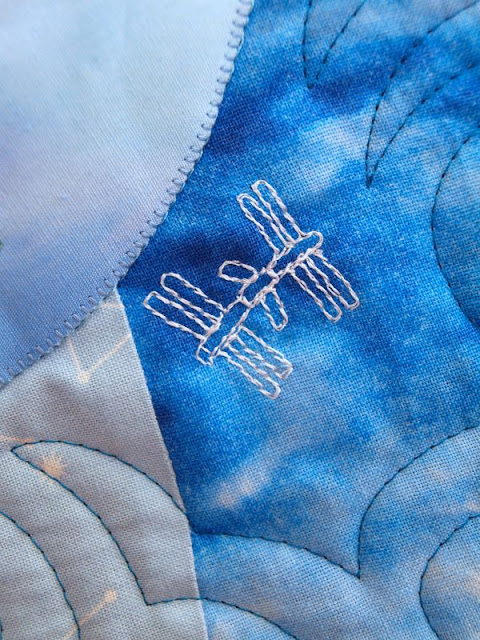 And of course, one of my favourite details, the International Space Station (also rather simplified, at about 1 1/4in across) passing by New Zealand. 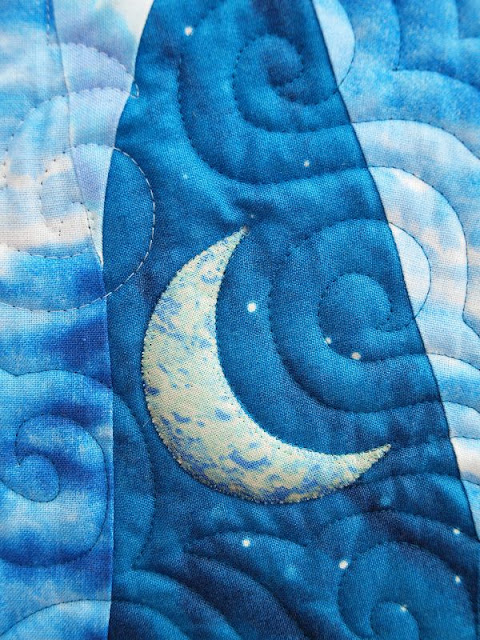 I had the perfect fabric for the crescent moon, then had to find a section of sky that was both suitably close and suitable dark to place it!

I mentioned several posts back about our plan to go and see the ISS. Well, we had a perfect viewing, as it passed right over Adelaide on a clear evening, and was easily visibly for over 5 minutes. James was the first to spot it. I set up my DLSR on the tripod and took a number of 4-second exposures. Without a remote-shutter, even the most careful depression of the button moved the camera a fraction, and my small tripod isn't the most steady, so the path looks rather jagged in my photos, but I was pleased with the results from so little effort. I especially liked the image below, which was towards the end of when it was visible (moving away from us, 'down') and shows a change in colour as the angle of the sun's reflection on it changed. (Several stars are also visible.) 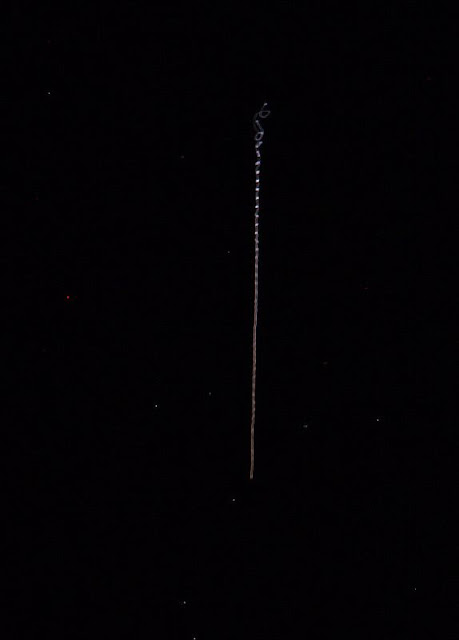 THIS IS A magnificent quilt> wow> All those details make it extra special. Thanks for sharing and showing us the 'secret' additions.

That is a super-cool quilt!

I have been watching you make this. It is absolutely stunning. You should have put it in a show. You would win awards. You have completed it so quickly too!!!

Utterly awesome. There is one very fortunate boy in your life.

This is wonderful and to look at the details is a pleasure.

Your quilt is amazing. I read with interest the process you followed. There is so much work involved. Your work is stunning and your attention to detail makes this quilt extremely special.
That's one lucky little boy!

I'm always amazed by your quilts. The recipient of this is one very lucky little boy!

Your quilt-is-awesome! I love it...bet the children and your DH are proud of you too.

Magnificent quilt. I love all of the special touches that you added. The owner will be finding fun new things for years!!

Emma, it's incredible. I have no other words, just a dropped jaw...

Amazing quilt. Well done. My little boy would love this. Have youa pattern for sale?