The Weight of the World

This is the weighted quilt I wrote about a few days ago. As I mentioned, weighted quilts can be calming or soothing for people who have sensory issues (such as many people on the autism spectrum) or restless legs. I had to photograph it lying flat on the ground, because the added weight means it won't hang nicely on a wall, even if I had tape strong enough to hold it! It's 35 x 45in. 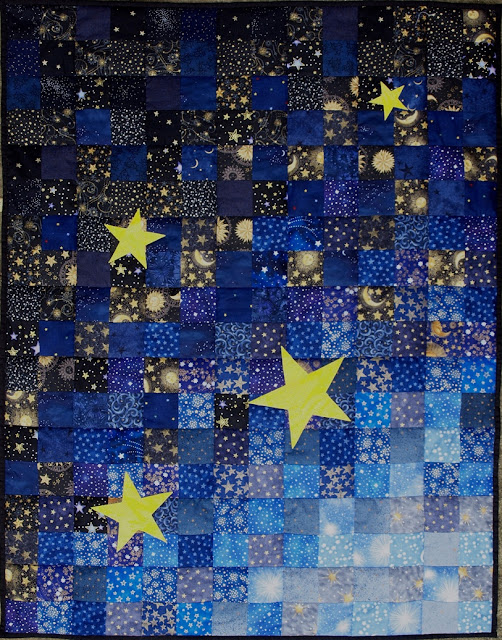 I started with a 14x18 layout of squares cut from my stars stash (and a few plainer dark blues), layered the top with a single layer of plain black cotton (more strength to keep the pellets in) and pinned them as I would a regular quilt sandwich, then fused four five-point stars and appliqued them with a small buttonhole stitch by machine. 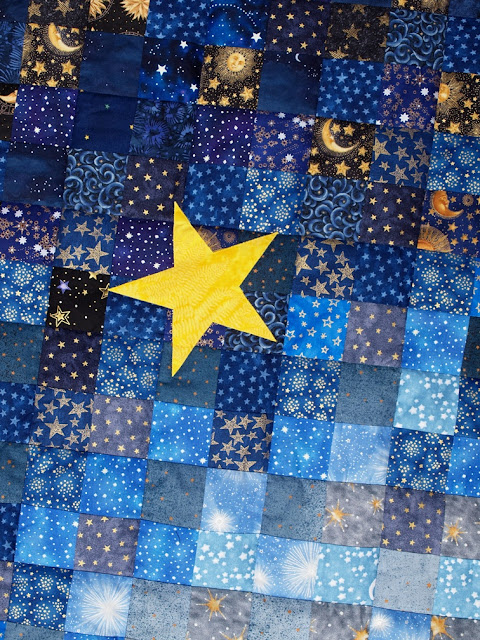 I then created the double-decker sandwich; charcoal flannel backing, wool/cotton wadding to soften the pellets, plain black cotton (pellet security), then the pre-layered top, and re-pinned the whole lot. I quilted around the edges and the channels, then worked my way up the quilt, filling and quilting as I went, and double-securing the ends of every seam. 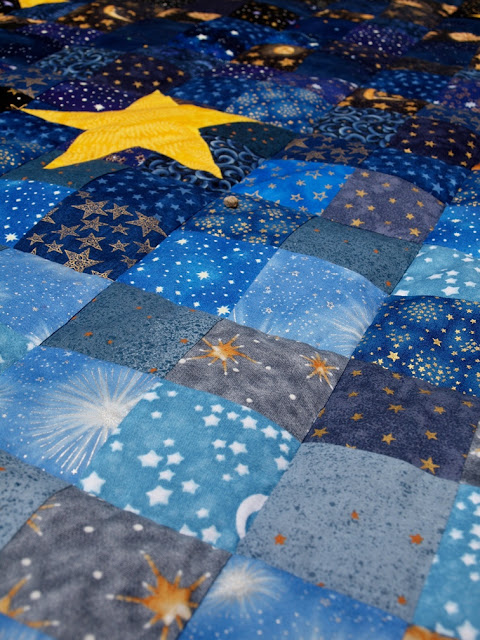 I then added plain black binding in my usual manner - but slowly, due to the need to manoever all the tiny pellets away from the needle and keep it straight and even (which was harder than I'd thought).But after hand stitchign the binding to the back, I reinforced it with a neat row of machine stitching. I don't like machined bindings usually - I don't like the visible stitching, and they're rarely neat all the way around. But hand stitching first gives the back a perfectly straight (and perfectly placed) finish, and makes the final machine stitching much neater. Of course, this approach won't please those who choose to machine bind for reasons of speed, but in this instance it allowed me to add strength to the finish without sacrificing neatness. 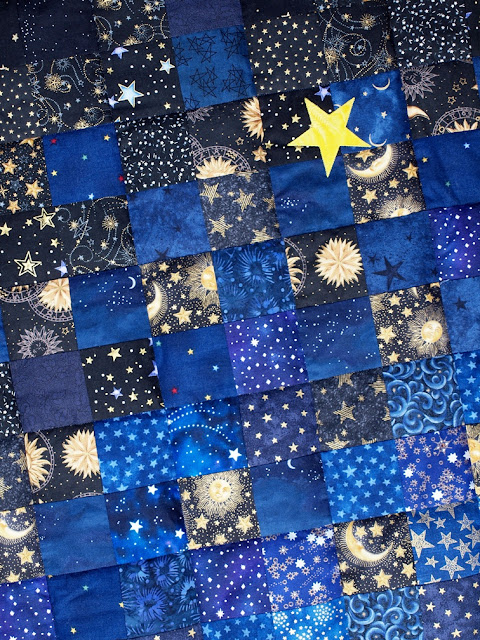 In a few places the stars overlapped the grid for the pellets, but rather than put ugly dark blue lines across the stars, when I came to a star, I followed the shortest path around the edge of the star back to the original gridline, so a few of the pockets are slightly odd shapes!

I've sent this quilt off already, and I hope it works as intended for the little boy - and that he and his mother like it!
Posted by Emma at 10:31

Great job, Emma. I love the value shift. I'm sure the little boy and his mom will love it!

Lovely work and good solutions to the problems of using the extra weights. Well done.

I hadn't heard of a weighted quilt before. What are the pellets? How did you put them in? The appliqued stars look terrific on the pieced background - so much dimension.

Thankyou Emma; we love the quilt you made for our little boy; it looks beautiful in his room and he sleeps so soundly under it. This morning he was still lying in his bed after waking rather than running to our room because he was so relaxed.

Besides the pellets what else would i delete if I want to make a regular quilt and where can I get the pattern? My grandson would love this for Christmas.